A report on the scientific literature and commentary

There has been much controversy over the last 2 decades about the perceived causal relationship between a chiropractic cervical adjustment and dissecting arterial aneurysm on the internet, in the literature and in the beliefs of some in the medical community. Prior to examining the published facts, lets first clarify what an arterial dissection is.

According to Haneline and Rosner (2007)

Arterial dissection is an uncommon vascular wall condition that typically involves a tear at some point in the artery's lining and the formation of an intimal flap, which allows blood to penetrate into the muscular portion of the vessel wall. Blood flowing between the layers of the torn blood vessel may cause the layers to separate from each other, resulting in arterial narrowing or even complete obstruction of the lumen (Fig 1). Moreover, pulsatile pressure damages the muscular layer, resulting in a splitting or dissection of the intimal and medial layers that may extend along the artery variable distances, usually in the direction of blood flow.Another way for dissection to occur involves a primary intramural hemorrhage of the vasa vasorum, which builds pressure between the intimal and medial layers and may eventually rupture into the vessel's true lumen. Occasionally, a double lumen (also known as false lumen) is formed when the subintimal hemorrhage ruptures back into the arterial lumen distally. (pgs. 113-114) 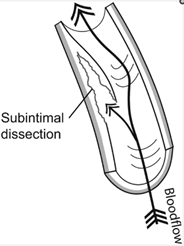 In addition, Haneline and Rosner (2007) wrote a decade ago:

In a September 2017 presentation by Candice Perkins MD, Neurology, Vascular Neurology (an attending stroke neurologist and both an Associate and Assistant Professor of Clinical Neurology at the State University of New York at Stony Brook Hospital and Medical Center from 2001 - 2016) in New York, she stated that there is zero evidence for direct causal relationship between stroke and a chiropractic cervical adjustment performed by a licensed chiropractor in the appropriate clinical presentation. Dr. Perkins went on to explain that there are numerators and denominators. The denominator are strokes and the presence of a patient with a stroke. The numerator is the associated incidence. In her vast experience with stroke, there are an unlimited number of numerators with chiropractic being one, however if one uses that same equation, there are hundreds of other equally potential factors with primary care medical visits being of equal incidence. In addition, with her understanding chiropractic as a patient and from the literature, there is scant evidence that a chiropractic adjustment can be the causative factor of cervical dissecting aneurysm.

Researchers from the University of Pennsylvania Department of Neurosurgery came to the same conclusions. In a systematic and meta-analysis of chiropractic care and cervical arterial dissection, they concluded:

There is no convincing evidence to support a causal link between chiropractic manipulation and CAD. (pg. 1)

Church et. Al reviewed 253 published articles and scored them on a GRADE system with 4 variables, high, moderate, low and very low in reliability of the research available on CAD and chiropractic adjustments. They concluded:

Scrutiny of the quality of the body of data using the GRADE criteria revealed that it fell within the “very low” category. We found no evidence for a causal link between chiropractic care and CAD. This is a significant finding because belief in a causal link is not uncommon, and such a belief may have significant adverse effects such as numerous episodes of litigation.  (pg. 6)

Perhaps the greatest threat to the reliability of any conclusions drawn from these data is that together they describe a correlation but not a causal relationship, and any unmeasured variable is a potential confounder. The most likely potential confounder in this case is neck pain. Patients with neck pain are more likely to have CAD (80% of patients with CAD report neck pain or headache), and they are more likely to visit a chiropractor than patients without neck pain. (pg. 7)

This is the same opinion of Dr. Perkins as reported above, where the presence of CAD does not have a causal relationship simply because the neck pain brought them to a chiropractor. The CAD would have happened with or without the chiropractic adjustment as is concluded by medical experts and the literature.

To further the argument, Cassidy, Boyle, Cote`, He, Hogg-Johnson, Silver and Bondy (2008) reported:

There were 818 VBA [Vertebral Basilar Artery] strokes hospitalized in a population of more than 100 million person-years. In those aged 45 years, cases were about three times more likely to see a chiropractor or a PCP before their stroke than controls. Results were similar in the case control and case crossover analyses. There was no increased association between chiropractic visits and VBA stroke in those older than <45 years. Positive associations were found between PCP visits and VBA stroke in all age groups. (pg. S176)

Therefore, based upon the best current evidence, it appears that there is no strong foundation for a causal relationship between CMT [Chiropractic Manipulative Therapy] and VADs [Vertebral Artery Dissection]. The most plausible explanation for the association between CMT and VADs is that individuals who are experiencing a vertebral artery dissection seek care from a chiropractic physician or other manual practitioner for relief of the neck pain and headache that results from the dissection. Sometime after the visit the dissection proceeds along its natural course to produce arterial blockage, leading to stroke. This natural progression from dissection to stroke appears to occur independent of the application of CMT. (pg. 4)

Church, Sieg, Hussain, Glantz and Harbaugh (2016) concluded, and an opinion that appears to reflect the facts of the issue and in accordance with those in chiropractic and medical academia based upon the author’s strong agreement:

In spite of the very weak data supporting an association between chiropractic neck manipulation and CAD, and even more modest data supporting a causal association, such a relationship is assumed by many clinicians. In fact, this idea seems to enjoy the status of medical dogma. (pg. 9)

That is the final definitive opinion of the Neurosurgery Department at the University of Pennsylvania.

More in this category: « The Mechanism of the Chiropractic Spinal Adjustment/Manipulation: Subluxation Degeneration - Part 4 of a 5-Part Series Chronic Pain and Chiropractic: A 12-Week Solution & Necessity for Care »
back to top