Abstract: This case report demonstrates the use of conservative chiropractic care in the treatment of cervical and lumbar disc injuries as well as ligamentous instability in the cervical and lumbar spine of a person injured in a double impact automobile collision.

Introduction: The patient, a 48-year-old male who reports he was a passenger in a hotel shuttle van which was struck on the passenger side by another automobile, followed by a full-frontal impact of the shuttle van hitting a pole. The patient was wearing a seatbelt. From the scene of the accident, he was transported by ambulance to a local hospital emergency department where he had x-rays and a CT scan of the head taken. He received contusions to the chest, legs and shin. He was released with prescription medication and told to follow up with his doctor when he got home if he continued to have problems.

Patient complaints were as follows: At the time of the accident, the patient noted he was dizzy and had tingling and numbness in the extremities. He complained of generalized ache, pain and stiffness in the neck and back. He also suffered from confusion.

At the time of his initial evaluation at my office, approximately 10 days post-accident, he complained of neck pain and stiffness which increased with physical activity and decreased with rest and medication. Neck pain was referred to the occipital region, across the shoulders and into the upper thoracic. He reported pain into the thoracic region, described as tightness and stiffness, which also increased with physical activity and improved with rest. His low back was his primary area of complaint - with the most significant and consistent pain that increased significantly with weight-bearing activity and only improved with lying down. Patient had knee stiffness and pain on the right and soreness in both knees and ankles. There was notable bruising of the chest and a contusion. Patient continued to have symptoms of mild traumatic brain injury, consisting of feeling dazed and confused with some amnesia following the accident. Patient continues to have headaches and brain fog.

Prior treatment: Patient received a prescription for anti-inflammatories and a muscle relaxer from the emergency department. He was not working and resting as much as possible and utilizing hot showers.

Past medical history: Patient reports he was involved in an automobile collision 2 to 3 years prior to this collision and received injuries to his neck and back. He had a brief course of chiropractic and physical therapy care. He was released from care without any restrictions or residual complaints. He was working without restriction since being released from that accident and was asymptomatic prior to this accident.

Clinical findings: Patient is 48 years old, 5’11” and 235 pounds. Blood pressure is 130/80 pulse is 75. Patient exhibited no swelling or edema to the extremities. Cranial nerves were intact. Patient appeared antalgic and guarded in his movements.

Physical findings: Palpation revealed significant pain and tenderness in the suboccipital region as well as guarding spasm in the cervical, upper thoracic and lumbar region. Patient had visible restrictions of range of motion in the cervical and lumbar spine, associated with pain. Patient had a positive Foramen Compression Test and Jackson’s Compression Test bilaterally. Manual cervical traction provided some relief in the C1 occipital region, but increased pain along the side the neck and out across the top of the shoulders. Patient could not perform an Apply’s Scratch Test associated with pain in the upper thoracic region. He had a positive SOTO Halls Test for pain in the cervical region into the upper thoracic region. Straight leg raise test was restricted at 60° bilaterally for increased pain in lower back into the buttock region. Patient had a positive Kemps Test bilaterally for joint pain and muscle pain. McMurray’s Test was positive the right knee. The patient was unable to obtain full flexion of the right knee.

Based on the patient’s subjective symptoms and examination findings, x-rays of the cervical and lumbar spine, including flexion extension views were ordered. I personally reviewed these images.

Retrolisthesis is noted at C-4 in relationship to C-5 on the neutral lateral view.

Flexion shows significant fixation to normal movement. C-3 demonstrates anterolisthesis in relation to C-4 and it is noted that C-4 shows realignment in relationship to C-5, which is indicative of ligamentous laxity and injury.

Extension demonstrates significant fixation to normal movement. There is further retrolisthesis of C-4 in relationship to C-5 extension.

Small osteoarthritic spur is noted on the anterior inferior aspect of C-4 and posterior disc thinning.

Lumbar: Biomechanical misalignment is noted as rotation of L1, L2 and L3 to the right. Patient has a significant external rotation to the left ilium and the right ilium appears elevated in relationship to the left.

Osteophyte is noted of the anterior superior aspect of L4 associate with significant posterior disc thinning.

Retrolisthesis of L-3 in relation to L-4 on the neutral lateral image.

Flexion reveals significant fixation to normal movement and realignment of L-3 in relation to L-4 flexion - indicating some degree of ligamentous laxity. 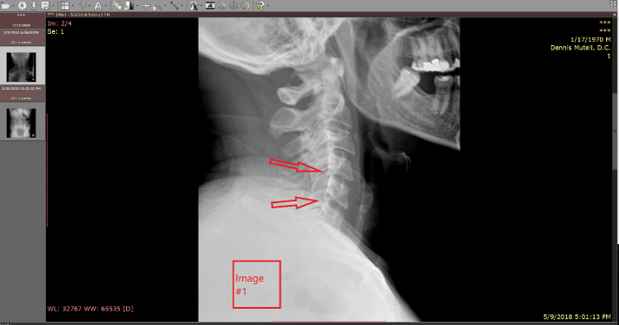 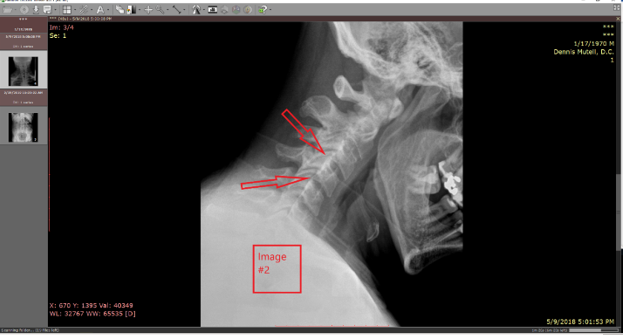 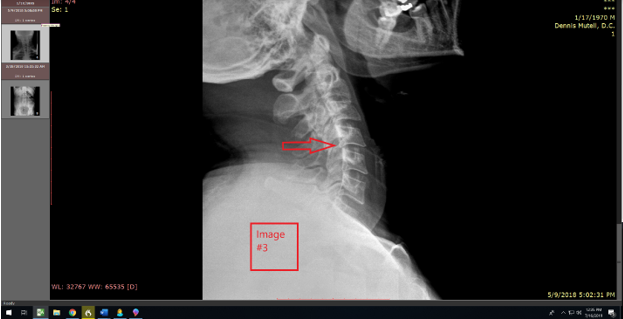 Cervical MRI without contrast: Following my personal review of the MRI images, my impressions are as follows:

C-2 / C-3: High intensity signal in the posterior aspect of the disc, which is visualized as a radial tear.

C-3 / C-4: Disc protrusion on the left causing stenosis of the left neural canal, resulting in contact with the C-4 nerve root.

Lumbar MRI without contrast: Following my personal review of the MRI images, my impressions are as follows:

Conus terminates at L1 and appears normal in position. Generalized arthritic changes of the lumbar facet joints and mild thickening of the ligament of flava from the mid to lower lumbar. 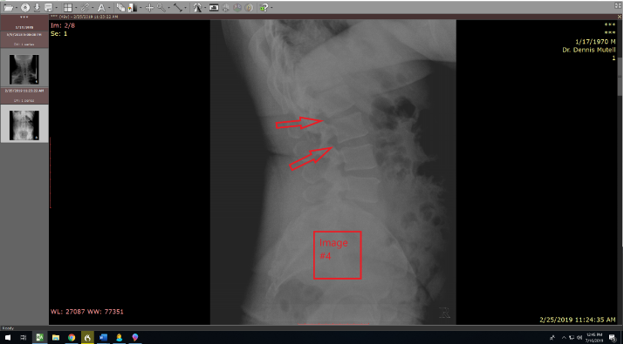 Number 5: Cervical MRI without contrast. C2 – C3 demonstrates high intensity signal in the posterior aspect of the disc which is visualized as a radial tear on the axial view. 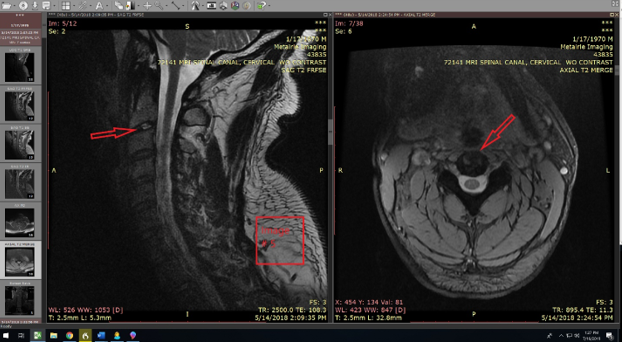 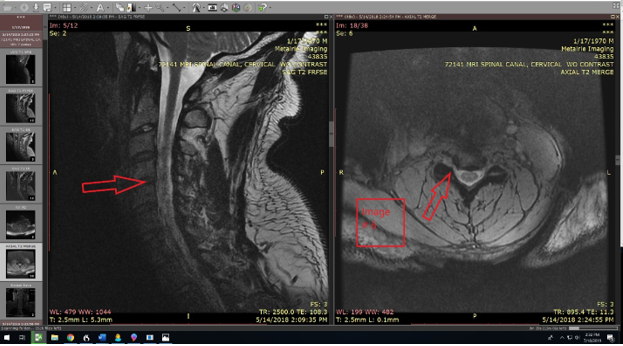 Number 7: Lumbar MRI without contrast. Disc protrusion on the right resulting in stenosis of the right neural canal with associated high signal intensity in the posterior the right disc indicative of recent trauma. 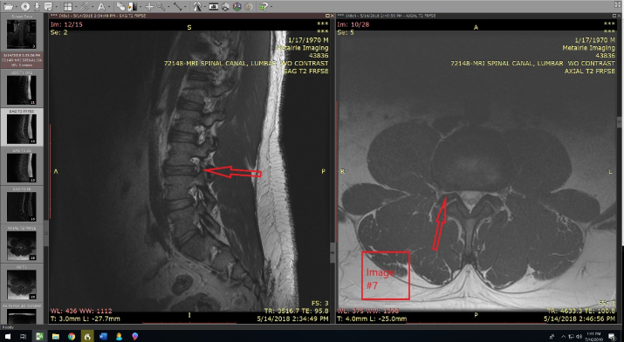 Treatment: Following review of all diagnostic imaging, there were no contraindications to cervical and lumbar spinal adjustments. Patient received chiropractic spinal adjustments to the cervical and lumbar spine in association with at home and work recommendations, as well as instructions for the utilization of ice, TENS and an at home exercise program to improve flexibility and strength.

Discussion: Doctor of Chiropractic trained in MRI spine interpretation, spinal biomechanics, and qualified as primary spine care physicians, are capable to triage patients involved in automobile collisions resulting in injury. Through proper identification of the injuries, establishing a diagnosis and a treatment plan to address the injuries and evaluate for the need of co-management with medical providers a traumatically injured patient has the best chance for a return to function.

More in this category: « CASE REPORT: Severe Disc Herniation without radicular symptamotology CASE REPORT: Early Diagnosis and Treatment of Stress Injury and Pending Spondylolisthesis in the Young Athlete »
back to top