CASE REPORT: Early Diagnosis and Treatment of Stress Injury and Pending Spondylolisthesis in the Young Athlete

Introduction: A 13-year-old, mesomorphic male presented with a chief complaint of localized lower back pain after suffering an extension injury in a football game. The patient was pinned between a player behind him who was below the pelvis and a player in front of him above the pelvis which extended the lumbar spine upon impact.

Clinical Findings: Posture analysis indicated the following postural abnormalities: left head tilt (-Θz), high left shoulder, high right pelvis, Anterior head translation (+z), rolled shoulders. The patient’s gait was altered. Bilateral weight scales revealed a +24 pound differential on the right. Dejarine’s triad reproduced pain on the left side of the lower back. Thoracolumbar range of motion assessment revealed a 35-degree decrease in flexion, a 20-degree decrease in extension with severe pain, and a 20-degree decrease bilaterally for lateral flexion. Stork’s sign was positive and reproduced significant pain. Kemp’s test was positive bilaterally reproducing pain on the left while leaning into the ipsilateral and contralateral sides. Straight leg raiser, Braggard’s test, and Double leg raiser were positive on the left and reproduced local pain in the left lower back. Digital laser foot scan and lower extremity inspection revealed excessive pronation of the feet bilaterally. Muscle tests were performed for the L4, L5, and S1 myotomes and were grade 5/5 within normal limits. Patellar and Achilles reflexes were +2 bilaterally within normal limits. The sensation was tested using light touch for the L4, L5, and S1 dermatomes and were within normal limits bilaterally.

A lumbar spine MRI w/o contrast was obtained. This study was performed with advanced weight-bearing technology utilizing multiweighted and multiplanar imaging on a 1.5 Tesla High-Field Philips MRI without contrast. Type I pedical marrow signal hyperintensity changes and marrow edema was observed at the L5 pedicle on the left.   An active defect with bone marrow edema can be seen as a bright signal on T2-weighted and STIR sequences and low signal on T1-weighted sequences (1). Disc bulges were observed at the L4-L5 and L5-S1 levels, compressing the ventral thecal sac. 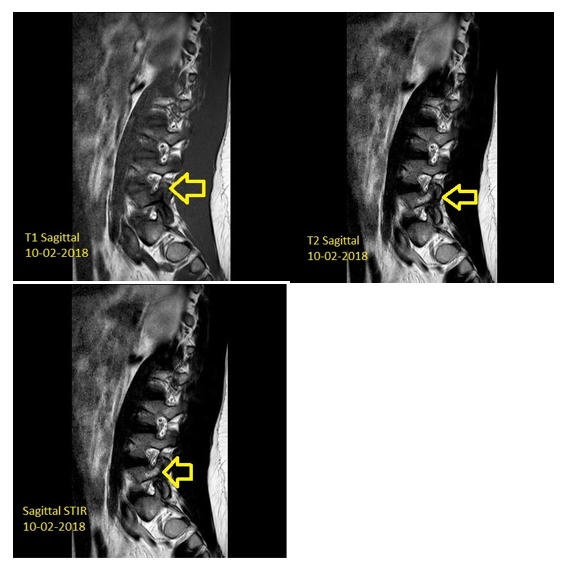 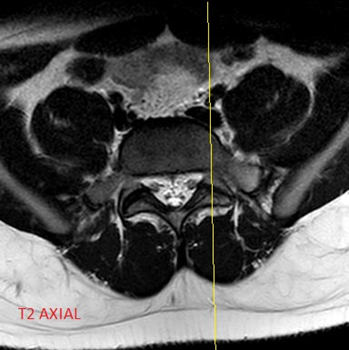 A custom Boston Overlap Brace and custom orthotics were ordered immediately for the patient. The brace was worn for roughly 12 weeks for the majority of the day. The patient underwent conservative care on 20 visits including both manual and instrument-assisted Chiropractic adjustments, cold laser therapy, mechanical flexion-distraction, Kinesio-taping, and Pettibon wobble chair.

A follow up lumbar spine MRI was obtained 8 months later, before clearing the patient to return to participation in football. Type 2 Pedical marrow signal hyperintensity changes were now observed at the left L5 pedicle. Type 2 changes are characterized by hyperintensity on T1 Weighted images, isointense on T2 weighted images and hypointense on STIR or fat-suppressed images and is associated with the conversion of normal red hemopoietic bone marrow into yellow fatty marrow as a result of marrow ischemia (2). 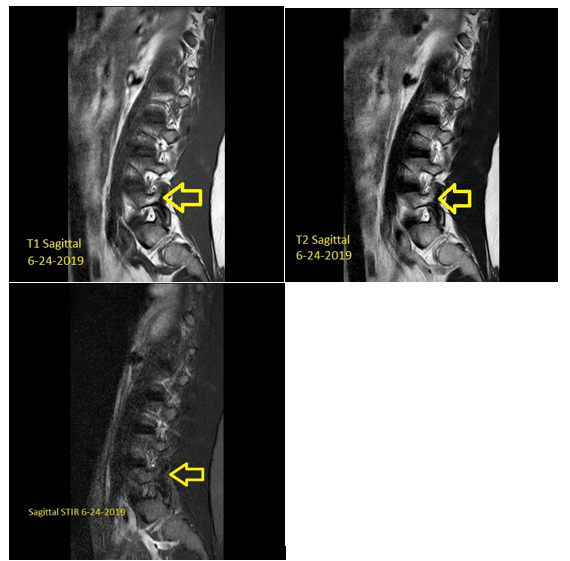 Discussion:  This is a case in which chiropractic among other modalities had a favorable outcome for this young athlete.  Type I Pedical marrow signal hyperintensity changes, as seen in the initial MRI, are likely to be inflammatory in origin and seem to be strongly associated with active low back symptoms and segmental instability.  Type 2 Pedical marrow signal hyperintensity changes, as seen in the follow-up MRI, indicate a more biomechanically stable state (3). It has been shown in some literature that to eliminate underlying causal conditions of spondylolysis and to install specific therapy early diagnosis is crucial.  MR has been shown to be an important first imaging modality in young patients with low back pain during and after exercise with hyperextension.  Plain films usually do not reveal pathological findings in developing spondylolysis (4).  In early spondylolysis, changes of MR signal intensity in the pedicle and pars interarticularis may be detected, even before fracture lines are to be seen on plain radiographs (5).  Resolution of pedicle marrow hyperintensity on T2 and STIR-weighted images has been associated with improved functional testing and a trend toward decreased pain (6). Further studies are necessary to confirm MRI to be the method of choice for early diagnosis.  Health care providers who do not order advanced imaging for this type of injury are at risk of misdiagnosing the condition and allowing a young athlete to return to sports prematurely and risk further injury such as spondylolisthesis or cauda equina syndrome.  Unilateral isthmic spondylolysis is less common than the bilateral form and frequently over-looked on imaging (1).  It may be found in unilaterally loading activities and may progress to bilateral defects if not diagnosed and properly treated early.