The patient is a pleasant, 42-year-old female with acute onset lower back and left leg which began suddenly approximately 1 week ago. She reported that the onset of the pain began mid-day while not doing anything in particular that she can relate as causally responsible. She reported using a yoga wheel to exercise and stretch the day prior to the onset of pain. She states that the pain was localized to her lower lumbar region. It was incapacitating and she was unable to move off the floor for a number of hours. There was no loss of bowel or bladder control. She reports having used Diclofenac, Ibuprofen, Ice, Massage, Acupuncture, and Cupping in the past week to find relief. While she has experienced brief episodes of improvement, the condition is gradually worse. She now reports lower back pain with radiation down the left leg to the dorsum of the foot involving all toes.

She reports no prior symptoms similar to the current complaints and was symptom-free until the day after she exercised while utilizing the yoga wheel. Past medical history is significant for renal cystic disease.

The patient’s superficial appearance indicated obvious distress. Her ambulation was slow with a gait that favored her right leg and avoided pressure on the left. Minor’s sign was present. This sign is present when the patient arises from a chair by using the upper extremities on the arms to stand upright thereby limiting the amount of effort the lower extremities exert.

The patient is 5 feet 4 inches tall and weighs 190 pounds. BMI is calculated at 32.6. Her heart rate is 82 BPM, blood pressure of 138/84 mm Hg, and blood oxygen of 98%. On examination, the patient was oriented to person, place, and time. Examination of the eyes, ears, and throat appeared normal.

The patient’s range of motion was decreased in all ranges with pain and spasm in the erector spinae muscles. Muscle testing of the lower extremity revealed a 3 out of 5 extensor Hallicus Longus muscle graded using the Oxford scale. No atrophy was noted. Sensation testing with the Whartenburg pinwheel revealed hypoesthesia of the L5 dermatome. Deep tendon reflex testing revealed 1+ for the left medial hamstring. The medial hamstring reflex has been shown to be precise and accurate in predicting radiculopathy of the fifth lumbar nerve root.[i]

Orthopedic testing showed a positive straight leg raise test both in the supine and seated (slump) position with reproduction of the patient’s shooting pain along the posterior aspect of the left leg with an audible response due to the severity of the pain. (Majlesi, Javid, et al) demonstrated the straight leg raise to have higher specificity and is therefore of more clinical value to determine disc herniations with nerve root compression versus slump alone.[ii]

Due to the severity of the patient’s symptoms as well as the corresponding neurological deficits, a non-contrast MRI of the lumbar spine was immediately ordered.

Often in clinical practice, when imaging is needed to determine diagnosis, prognosis, or treatment plan, doctors will rely solely on the radiologist’s report. Herzog et al. found that general radiologists had an error rate of 43.6% when reporting disc morphology. Unfortunately, errors are not always contained in the disc morphology.[iii]

In reviewing this study, it revealed that the images are often degraded by artifacts due to motion. Loss of the lumbar lordosis is noted. There is no fracture of cortical destruction. No spondylosis or spondylolisthesis is seen. No evidence of bone marrow edema. No focal suspicious osseous lesions are seen. The conus is located at the mid-L1 level and the conus is normal in caliber and signal intensity. These findings are consistent with the radiology report thus far.

In reviewing the T2 weighted midline sagittal image, we can see that the discs through L4 remain well hydrated highlighted by the red arrows 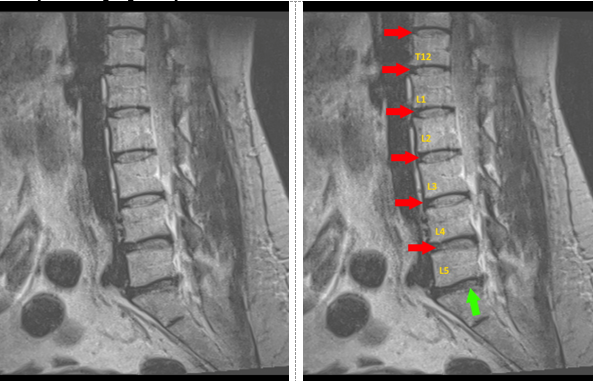 The images below demonstrate a normal disc at L4-L5 without any facet arthropathy or thecal sac involvement. 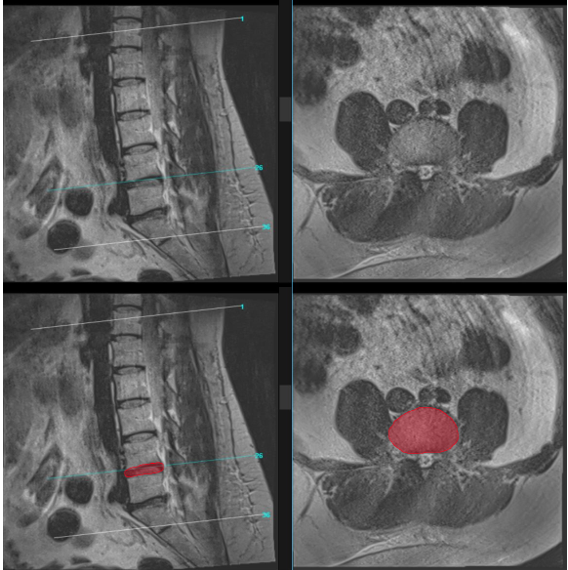 The image revealed there is no flattening of the thecal sac at the L5 level and the disc demonstrates a left, paracentral focal lesion and therefore is categorized as a herniation. Since the base is wider than the apex, it is a protrusion-type herniated disc affecting the left L5 nerve root.[v] 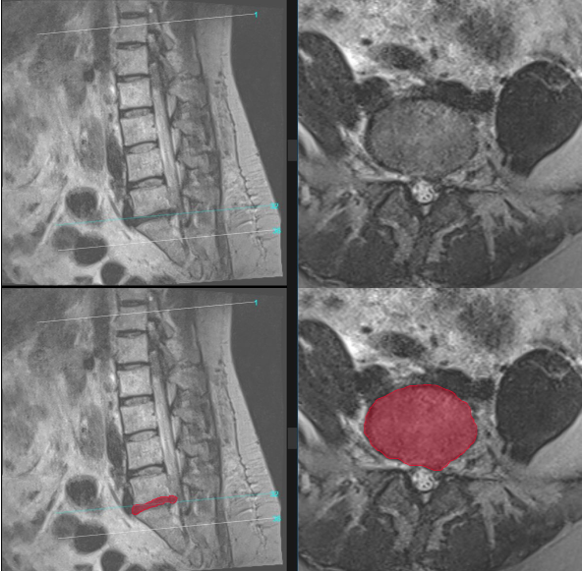 After MRI results were reviewed with correct interpretation, management options were discussed with the patient, specifically interventional pain management and neurosurgeon specialists. The patient opted for pain management. Lumbar left-sided L5/S1 epidural steroid injection was performed and the patient reported significant in the recovery room. Unfortunately, when the local anesthesia dissipated, she had significant severe left lower extremity pain. Due to the severity of the condition, a neurosurgical referral was arranged and the patient was met at the Emergency Department where an urgent L5/S1 microdiscectomy was performed.

This case highlights multiple important considerations in the care and management of spinal-related conditions that are typical of a chiropractic office.

The decision to order MRI is often clinically supported by a neurological examination that demonstrates a combination of sensation change along a dermatome, motor weakness, and a deep tendon reflex alteration. In the case of the L5 nerve root, most practitioners only use the patellar and Achilles deep tendon reflexes which evaluate for L4 and S1 respectively. This case demonstrated that having additional information can help when clinically correlating the symptoms to the MRI images. Medical hamstring reflex changes are pathognomonic for L5 nerve root alterations and are a good predictor of radiculopathy in that region.

Additionally, it is not acceptable for a practitioner to rely solely on the radiology report in order to make clinical management decisions. This report demonstrates that there can be some wildly erroneous interpretations of the imaging study. In the end, any physician managing a patient such as this is ultimately responsible and needs to be certain that all the data gathered is accurate and reliable in which to base medical decisions. Correlating the information gathered in the patient history, physical examination and imaging is of utmost importance. In this case, knowing through history and physical examination that the left L5 nerve root was almost certainly involved prompted special attention to that area of the MRI images.

[2] Majlesi, Javid, et al. "The sensitivity and specificity of the Slump and the Straight Leg Raising tests in patients with lumbar disc herniation." JCR: Journal of Clinical Rheumatology 14.2 (2008): 87-91

More in this category: « CASE REPORT: T2 Hyperintense Extradural Lumbar Mass. Clinical Presentation and Outcome Case Report – Utilization of the Transcapular Y-View Radiograph in the Diagnosis of Shoulder Impingement Syndrome »
back to top