Abstract: The objective was to differentially diagnose metastasis from musculoskeletal disease.

A very athletic 37-year-old female, the owner of a CrossFit fitness center, was under my care for eight years. She participated in wellness and targeted treatment for multiple injuries and musculoskeletal complaints. Her initial presentation was cervicogenic vertigo that failed conventional ENT and PT but resolved with chiropractic care. A professional relationship ensued that included advice on various aspects of health and lifestyle. The patient looked to me as a first-line approach for many conditions. The patient presented with upper thoracic pain of musculoskeletal origin, and then six months later, lower thoracic pain resulting from metastatic disease.

The patient’s history included breast cancer, which was successfully treated medically. She was advised to continue with Tamoxifen but chose not to. Two and a half years later, the patient presented to my office with upper thoracic pain. Plain x-rays were imaged:Three views of the thoracic spine were obtained. Thoracic spine alignment and vertebral body height were maintained. The intervertebral disc spaces were preserved. There was no evidence of acute fracture or dislocation. A visualized portion of the lung is clear. Chiropractic manipulation and acupuncture were administered with favorable results. Seven months later, the patient returns with lower thoracic pain, rated 8/10 VAS

was elicited with light, digital pressure in the related musculature. Segmental joint dysfunction was evident in T11, L1, and left pelvis. Provocative factors were lifting and various movements. With digital pressure, there was sharp radiating intercostal pain.

I recommended an MRI, but the patient was hesitant and wanted to check her insurance.

10 days later, she returned with less thoracic pain and was treated without incident.

3 weeks later, the patient returns, stating that the pain is now constant in the thoracolumbar region and now radiates to the mid-axilla line. The pain wakes her up at night, and there is nothing that she could do to find relief. I then told her that she has to have the MRI imaged, but she resisted.

Four days later, she states the pain continues to be experienced daily and was rated 8/10 on a visual analog scale. With various motions, lifting, and digital pressure, the pain becomes severe. She has tried resting, home therapy, exercise, over-the-counter medications, massage, and soft tissue techniques without benefit.

I then insisted that she now had to get an MRI; she consented but did not schedule it for three weeks. She suspended care during that time with no change in her pain.

I then saw her on the day of the MRI. She reported persistent pain in her thoracic region. I reviewed her MRI findings which were positive for breast cancer metastasis. I contacted her PCP for standard medical care.

The patient underwent a course of chemotherapy along with instrumented stabilization of the T12 motion segment, which was fully mineralized without hardware failure. The patient responded favorably and is now pain-free and returned to exercise, including Cross Fit.

TECHNIQUE: Axial and sagittal images of the thoracic spine were obtained at 3.0 Tesla.

The image to the left is a magnified sagittal T1 FLAIR-weighted view. The red arrows point to a decreased signal in the entire T12 vertebral body, extending into the right pedicle with smaller multiple lesions in the T11 and T10 vertebral bodies. There is a mild compression deformity along the superior endplate. 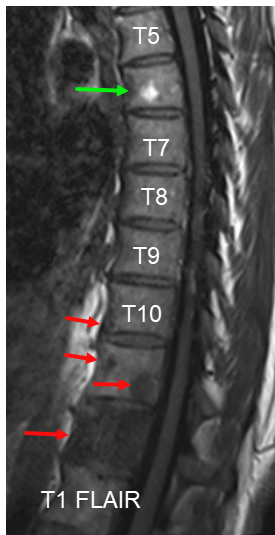 The increased signal, as noted by the GREEN ARROW, denotes a hemangioma.

The image to the left is a magnified T2 STIR view. The red arrows point to the brighter signal throughout the T12 vertebral body, with smaller lesions in the T11 and T10 vertebral bodies evidence of the metastasis. The T6 vertebral body has a homogenous signal as noted by the GREEN ARROW, unable to see the hemangioma. 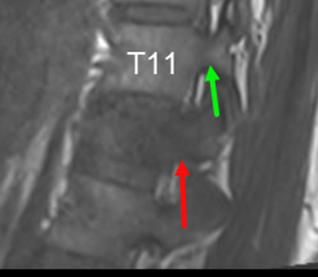 The image to the left is a magnified sagittal T1 FLAIR-weighted view. The RED ARROW points to the decreased signal in the pedicle. Compare that to the T11 pedicle with the normal signal as noted by the GREEN ARROW. 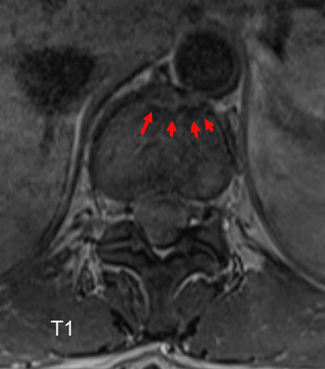 The image to the left is a magnified axial T1-weighted view of the T12 vertebral body. The RED ARROWS outline the fracture line.

More in this category: « Case Report – Utilization of the Transcapular Y-View Radiograph in the Diagnosis of Shoulder Impingement Syndrome CASE REPORT: Chiropractic management of posterior shoulder capsule tear »
back to top