The prevalence of neck pain is significant in the general population affecting 30%-50% in a 12-month period, and a lifetime prevalence exceeding 70%. This article is focused on the effects of chiropractic spinal adjustments (CSA) and cervical spine outcomes regarding pain and biomechanical functional outcomes. When considering intervertebral kinematics (specifically joint movement and residual gapping), manipulation is considered an effective treatment for neck pain. The problem with the generalized descriptor “manipulation” in a high-velocity, low-amplitude “quick thrust” conflates providers as physical therapists, osteopaths, and chiropractors all utilize similar descriptions in treatment. This can be confusing when considering care paths, and often misleading.

The original reporting of joint gapping by Cramer et. Al. (2002), and more recent reporting by Anderst et. Al (2018) utilized a chiropractic spinal adjustment performed by an experienced chiropractor. Therefore, this article will be focused on chiropractic to prevent confusion when considering a care path based on an evidence-based model.

Cramer et. Al (2002) reported that “the thrust given during the chiropractic procedure had the effect of increasing the gapping of the Z joints. The average difference between the control subjects…and the subjects that received a chiropractic adjustment and remained in the side-posture position was 1.33 mm…a difference of 0.71 mm was found between the side-posture group.” (p. 2464) Anderst et. Al. (2018) reported “The facet gap increased 0.9 +/- 0.40.” (p. 2332)

The evidence 16 years apart is consistent, with the most current article validating biomechanical changes as a direct result of a chiropractic spinal adjustment. Anderst et. Al (2018) also reported, “The results suggest that clinical and functional improvement after manipulation (CSA) may occur as a result of small increases in intervertebral ROM across multiple motion segments. This study demonstrates the feasibility of characterizing in real-time the manual inputs and biological responses that comprise cervical manipulation (CSA), including clinician-applied force, facet gapping, and increased intervertebral ROM.” (p. 2334)

Beyond post-MRI, which is unrealistic in clinical practice due to the cost, there are algorithms based on x-ray to help diagnose biomechanical changes and normalization of the spine. Muth-Seng et. Al. (2022) reported, “The study of the subsequent subject-specific spinal loading could help further the understanding of cervical spine biomechanics, degeneration mechanisms, and complications. We also know, despite the political rhetoric, that diagnostic x-ray is safe and has no carcinogenic effect. Tubiana et. Al. (2009) reported, “Among humans, there is no evidence of a carcinogenic effect for acute irradiation”. Diagnostic x-rays have had virtually no negative adverse health sequelae based upon this and the totality of other literature.”

There is technology that renders pre, and-post spinal biomechanics based on x-ray and ligamentous physiology to demonstratively document changes. It also renders visual evidence of permanent changes. Note the green line on the graph, indicating the ligament’s para physiological pathological limit. This is a clinical demonstrative indicator, based upon x-ray, and devoid of side effects to show the facets re-integrating (or lack thereof) post-CSA based upon normalizing spinal biomechanics. 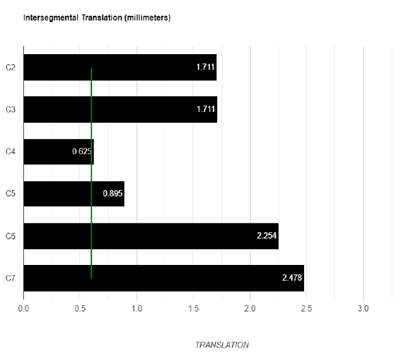 Anderst et. Al. (2018) concluded “The results demonstrate that target and adjacent motion segments undergo facet joint gapping during manipulation and that intervertebral ROM is increased in all three planes of motion after manipulation. The results suggest that clinical and functional improvement after manipulation (CSA) may occur as a result of small increases in intervertebral ROM across multiple motion segments. This study demonstrates the feasibility of characterizing in real-time the manual inputs and biological responses that comprise cervical manipulation, including clinician-applied force, facet gapping, and increased intervertebral ROM.” (p. 2334). Studies implicate the cervical facet joint and its capsule as a primary anatomical site of injury during whiplash exposures to the neck. Biomechanical investigations of the neck during whiplash simulations indicate that the cervical spine exhibits an abnormal S-shaped curve in which the primary motions of the vertebrae in the lower cervical spine is posterior retraction relative to their inferior adjacent vertebrae. (9). Analytical tools like Symverta can assess the locations of facet compromise for accurate treatment planning.

More in this category: « Chiropractic Protects and Aging Population From Loss of Function Vertebral Subluxation Complex vs. Patho-Neuro-Biomechanical Lesion »
back to top